A quote from official Soviet textbook for tank officers – Since 1983, in the course of modernization, an additional protection has been installed on the upper frontal part of the hull and the front part of the T-55 tank turret (Fig. 4.11), which increases its protection to the level of the T-72 tank of early modifications.
This improved the T-55M anti APFSDS protection to the level of Leopard-2 (believe or not it had 350 mm protection vs APFSDS) and made it comparable with it in terms of anti CE protection. 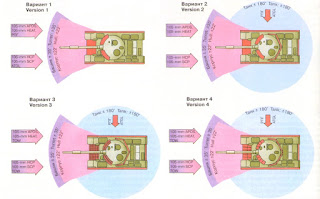