Combat deployment of "Uran-9" in Syria

Drawbacks identified during the combat use of the “Uran- CMRC (Combat Multirole Robotic Complex) in the SAR. 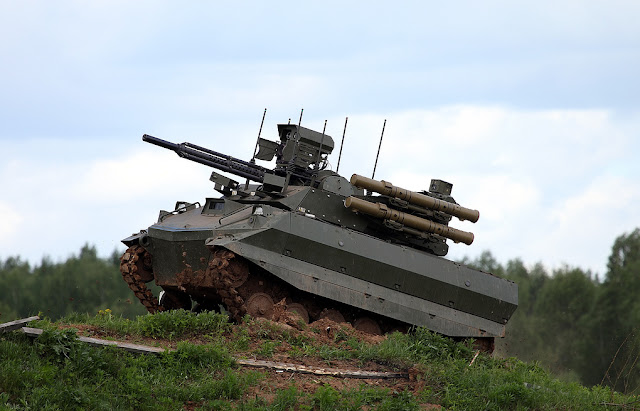 Guidance and control
When performing combat missions, the average range of sustainable control from the forward control point was 300- in a urban area with low-rise buildings (17 cases of short-term (up to 1 min) and 2 cases of prolonged (up to 1.5 hours) loss of control were recorded)/

Mobility
When moving under its own power, the low reliability of the running gear elements — support and guide rollers and suspension springs — was revealed.

Firepower
Unreliable operation of automatic 2A72 gun (6 delays and failure of the gun).
Late operation of the launch chains of an anti-tank guided missile (8 cases)
Failure of the thermal channel of the optic sighting station (2 cases).
CMRC provides firing only from a place, which significantly reduces its combat capabilities (weapons, aiming and reconnaissance devices are not stabilized).

Reconnaissance and observation
In the course of the research of reconnaissance capabilities, it was revealed that optical-location stations allow reconnaissance and identification of targets at a distance of no more than .
The field of view of the scopes on the screens of the automated places of firing operators is monochrome and has a low resolution.
The optical station OCH-4 does not allow detection of optical devices for observing and aiming the enemy and generates multiple interference while observing the ground and air surface in the surveillance sector.