The hollow charge (H.C.) 75 mm. ammunition was recently reported from SWPA, and later a small quantity was captured from the Japanese when they attacked our perimeter on Bougainville in March.

It is believed that the Japanese attach a greet deal of importance to this new ammunition. The earliest date of manufacture reported in this theater to date is August l943. The latest date of manufacture of that Captured on Bougainville was October 1943. Apparently this ammunition had to be brought in with great difficulty after our troops had landed in November and had control of sea and air.

It is of interest to note, however, that to date no reports have been received that H.C. ammunition, either 75 mm or rifle grenade, has been used against our tanks in this theater, though the monition was captured in the front lines where our tanks were actively engaged. The only Japanese H.C. ammunition for use in ground weapons so far reported in any theater is for the 75 mm. Type 41 Mountain Gun, and the rifle grenade. As far as it can now be determined, the symbolタ (TA) is used to identify H.C. ammunition.

b. A comparative test between the effect of Japanese and U.S. ammunition was obtained by having n U.S. M4 medium tank fire at the tank target at same range and angle. This merely represents the difference between an average U.S. tank weapon and a Japanese artillery piece commonly used in this theater.

c. Prior to obtaining tank hulls, Navy hull plate was used for armor piercing tests of ammunition for the 75 mm. Type 4l Mtn. Gun. The result of this test is included in this report.

a. It is concluded that the 75 mm. Type 41 mountain gun would be effective against light tanks at ranges encountered in this theater using any type of ammunition. Hollow charge and armor piercing high explosive ammunition penetrated the turret and side armor easily. High expensive sheared rivets, damaged the turret race, destroyed the truck and suspension, and ruptured sponson and top plates. 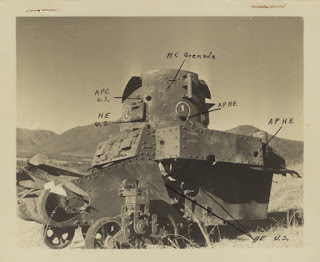 b. It is noteworthy that the APHE exploded in all cases whore it, struck armor, though all rounds that hit the ground were duds. This is in contrast to both 37 mm and 47 mm. APHE, in which cases, according to reports, many duds were obtained in tests fired against armor. Also of interest is that in all cases where the 75 mm. APHE penetrated armor, the short delay base detonating fuse functioned perfectly, in that the shells burst just after piercing the armor.

c. The steel cartridge cases used in the hollow charge 75 mm. ammunition were observed to have functioned very satisfactorily in firing. The obturation was good, they extracted easily after firing, and no cracks were noted in the walls of the cases. The exterior of some of these cases, however, were so badly rusted that they had to be scraped before being used.

The main targets were two M3 light tank hulls (face hardened armor). The hulls were placed at right angles to line of fire. The sides were l inch thick, and the turrets were l l/4 inches thick. In addition, one piece of 4 inch laminated armor was made by welding 3 (doors from engine compartments, each one inch thick, 3n the sides, giving a total of four inches. It was stated by the warrant officer in charge of welding that the face hardened side of the first piece of door was outward, in the second door it was inward, and in the third door the hardened side was out.

The hollow charge grenades were fired from a rifle grenade launcher on a long 6. 5 mm. type 38 rifle. No propelling co cartridges were available, so cartridges were improvised from ball ammunition by use of wooden bullets and paper weds. Photographs are shown in figures 4, 5, and 7. Results are summarized below:

Round #1. Fired at 20 yards range with reduced charge in cartridge.

seen on inside of turret, 18 inches away from point of penetration. (Figure 7)

gren" ‘e went over'the target, ever lOO yer<‘s, and was a dud. The flight

a. The first series of tests was conducted w1th the Japanese 75 mm. type 41 mountain gun. Results were as follows: 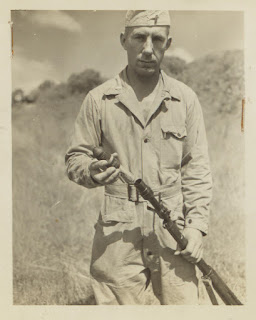 Hit side of tank (l inch armor). Made complete penetration l 1/2 inches in diameter, cut up the bogies, ruptured sponson plates, and punched hole into the engine room with the projected fragments. (Figure 5)

Round #3. l00 yards, hollow charge with instantaneous fuze. Hit exactly same hole as round #2. Widened hole, and deepened it to 2 1/2 inches. Loosened the welds holding doors on the side. (Stainless steel rods were used in welds.) (Figure 6)

Round #4. Hollow charge with instantaneous fuze. 100 yards. Hit four inch laminated plate. Made hole l inch in diameter. Step-own in hole disinter occurred at face of second plate, but not as great as for round #2. (Figure 6) 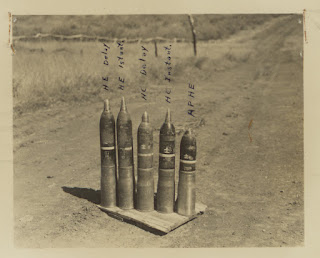 Round #5. APHE at 100 yards. Hit direct center of  4 inch plate. Detonated on face of armor. Absolutely no penetration. Made a slight dish in the plates. (Figure 6) -

b. Upon completion of the above tests, the series was continued by firing from the same location using the 75 mm. gun in a U.S. M4 medium tank.

Results were as follows:

Round #6. Tank gun with APC M61 from 100 yards. Hit side of tank near bottom went in one side, out of other, and ricocheted over the hill.

Round #7. Tank gun with AFC M61, Hit near bottom of the 3 welded plates. Broke off section of all three plates, tore them from the tank side, an scattered them around was somewhat Was somewhat effected, penetrated side of sponson, came out bottom of sponson, penetrated side again near the tracks, and left tank through the bottom. Results of rounds 6 and 7 mode interior if tank target a shambles. (Figures l and 10)

Round #8. Tank gun, H.E. with instantaneous fuze. Hit turret. Did not penetrate turret, but badly dented it, broke in the top plates of tank, lifted the turret up somewhat, and set fire to the tank target. (Figure 7)

Round #9. Tank gun, H. E. with short delay fuze, Hit side of tank target below sponson. May have penetrated and exploded inside. Result; blew out large section of tank side. (Figure l)

c. At this point, tests with the U.S. tank gun were discontinued, and the series of tests was continued using the Japanese 75 mm. 41 year Type mountain gun.

completely into turret and burst inside. (Figure 7)

Round #12. H.E. with delay fuze at undamaged turret of other tank hull. Did little demage to turret, but bent down the top of the tank armor, leaving a space between the turret race and the top armor. (Figure 8)

Round #13. H.E. with instantaneous fuze at side plate. Sheared off rivet heads. No other damages. (Firure 8)

Round #14. APHE at turret at l00 yards. Hit at approximately 30°. Made complete penetration of turret, burst inside, and started fire. Blew off pistol port on other side of turret. (Figure 8)

Round #15. H. E. with delay fuze fired into sides of tracks, Blew off track end return roller in center. Blew gut bottom plates of sponson, and the force continued up, breaking the tank to plates. (Figure 8)

Rounds #16, 17, 18. APHE at 300 yards. Three misses. Two hits. One long, all ricocheted over the hill. Base detonating fuzes failed to function on impact with round.

Round #20. H.E. with instantaneous fuze at 300 yards. Hit side of first tank. Blew off rear bogies and rear idler. Tank listed to the side, and turret, previously blown loose and to one side, rolled down the hill.

Prior to obtaining tank hulls for tests, tests were conducted against NAVY hull plate. Results of these tests are given as additional information.

a. Navy high tensile hull plate was used as the tost. (Navy Spec. 47-3-715 Steel plate-hull-high-tensile-black-Type A). A laminated shield 4' long, 3' wide 3" thick was constructed‘ by fastening  together six 1/2" steel plates with six l" steel bolts. The shield was placed in position on a rigid support of heavy timber.

b; Four rounds were fired from the Japanese 75 mm. Type 41 mountain gun. Results were as follows:

Round #2. Hollow charge, short delay fuze, did not completely penetrate the plate, but formed a cone shaped hole l 1/2 inches in diameter at point of entry and l 3/4 inches deep. (Figures 11 and 12)

Round #3. Complete penetration was obtained with APHE. Sufficient velocity remained after penetration to allow shell to strike earth in back of plate and ricochet l00 yards back and 50 yards up a hill. The BD fuze failed to function. (Figures 13 and 14)

Round #4. H.E. shell, instantaneous PD fuze, caused a slight indentation on front of plate, with no penetration. (Figure 15) 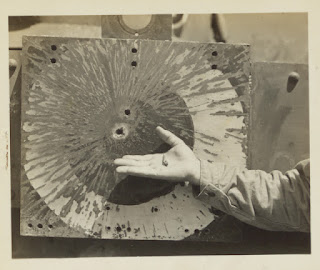 Figure 4. Effect of grenades against 4" armor plate. The punching results from grenade perforating l" side armor. 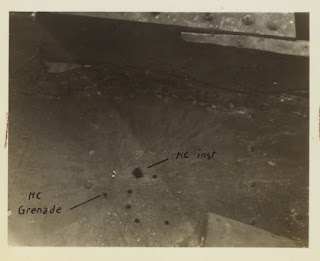 Figure 5. Result of 75 mm. Hollow charge shell, and rifle grenade against l" side armor. Note how shell blew in bottom plates of sponson. 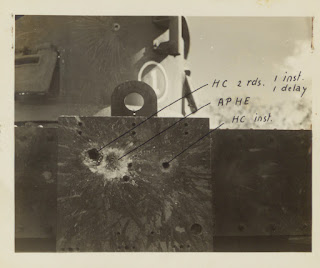 Figure 6. Result of Hollow charge and APHE against 4" laminated armor. 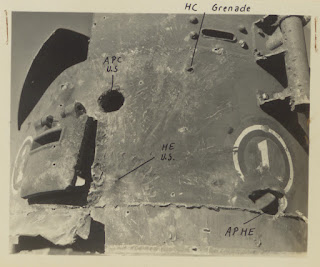 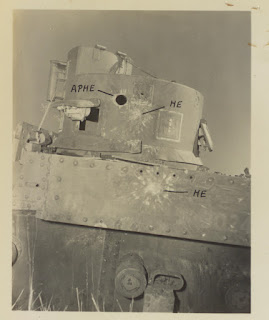 Figure 8. Effect of Jap ammunition for type 41 Mtn. gun against side and turret. The-track of this hull was blown off  by a Jap H.E. shell. 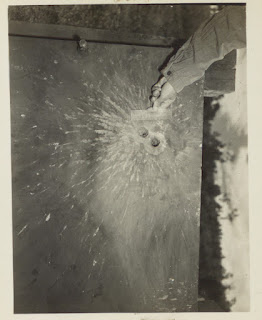 Figure 10. Effect of U.S. 75 mm. tank gun using 2 rds. APC shot. The projectiles entered from the right. In the lower left hand corner are holes caused by exit of shot 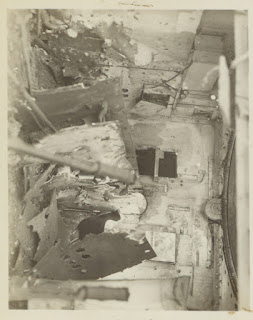 The top hole, a complete perforation, was caused by shell with instantaneous fuze. The bottom hole, incomplete, was caused shell with delay fuze. Not the effect of lamination. 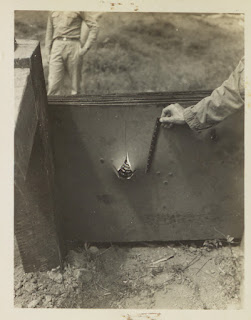 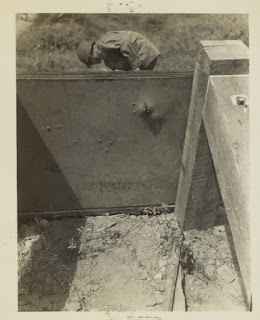 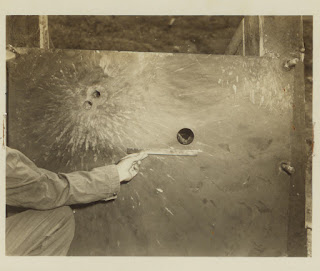 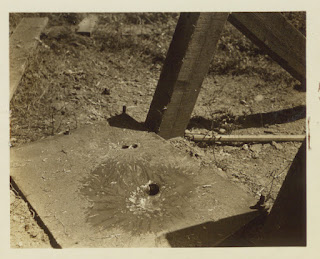