However, development of air attack weapons and, particularly, aircraft involved in the conduct of high-density air raids, has placed to the forefront the tactical ballistic missiles (TBM) and precision-guided weapons (PGW) and, above all, aircraft-launched and anti-radar missiles (ARM) and aerial guided bombs.
Therefore, the Buk-M1 designers were faced with the problem of upgrading this complex to make it capable of defeating tactical ballistic missiles and precision-guided munitions.
Simultaneously, based on experience obtained in Army and Navy exercises, it was deemed necessary to make the Buk-M1 complex capable of defeating surface targets (motor boats, frigates, destroyers, etc.) and land-based radio-contrast targets (radars, launchers, aircraft, command posts, etc.) to enhance the defensive capability of a land force grouping in coastal areas, in repelling enemy landing attacks.
To implement these tasks it was necessary to considerably upgrade Buk-M1 complex software and the missile.
Taking into account that a sector scan mode featured by elevation coverage of up to 55° was integrated in the target acquisition radar, type 9C18M1, in the design stage to enable the system to detect tactical ballistic missiles and steep-diving anti-radar missiles, no modernization of the system was required. The aforementioned angle ensures detection of tactical ballistic missiles launched up to 280 km away and azimuth coverage of 160° at distances from the protected installation, ensuring the required range of ballistic target acquisition by a self-propelled firing unit, as well as the launching and killing range of a tactical ballistic missile with effective reflecting area of up to 0.05 m2.

The software of command post 9C470M1 was considerably upgraded to make it suitable for the provision of target data and firing of the missiles.
As the 9A310M1 firing unit is equipped with a target type identification system, the effectiveness of anti-radar missile and high-speed targets is fairly high. Problems related to missile armament adaptation to the radio fuze in firing against a wide range of targets demanded minor system upgrades.
Engagement of surface and ground targets primarily implies their detection and lock-on on the background of strong reflections from "illuminated" surface and clutter.
Moreover, the missile's seeker, operating on the Doppler principle, can discriminate targets moving at a speed of over 50 m/s amid clutter. Therefore, to kill slow-moving and fixed surface or ground targets, the principle of target discrimination with reference to its radar contrast level (amplitude method) was used. This principle pays off particularly in operation against surface targets, because there is no clutter, reflections from the sea surface are weaker and the effective reflecting area of surface targets is relatively large (missile boat - over 50 m2 and destroyer up to 1,500 m2). 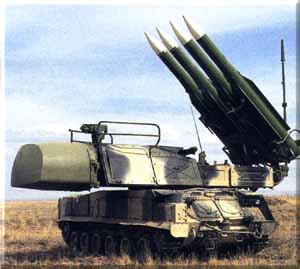 However, given the high level of reflections in high sea states and considerable reflections in operation against ground targets, special algorithms were developed to form the missile flight path to the target and provide for the optimal missile approach angles to the surface, to minimize surface reflections. In addition, surface and ground target lock-on methods and system have been modified.
The efficiency of these modifications was assessed in two stages: firings were conducted on land at a simulated surface (ground) target and at a mine sweeper anchored 12 km offshore.
To simulate surface (ground) targets, a Tu-16 aircraft and group of three C-25 weapons system missiles were placed at a distance of 5 to 7 km from the firing point.
Totally, eight missiles were fired. In six launches the missiles were guided onto the target and two direct hits were registered on Tu-16 aircraft.

Analysis of telemetry missile launches has indicated that at the moment of target acquisition, the radar homing head receiver desensitization did not exceed 30 to 40 dB. This proved that the missile trajectory was chosen correctly (according to calculations, the level of clutter could reach 70 dB).
The useful signal at the moment of the target lock-on was 50 dB higher than the homing head receiver intrinsic noise.
For the results of the missile launches against simulated target-aircraft, refer to Fig. 2, where the damage is clearly seen.
In Figs 3 and 4, photographs of a sea-going minesweeper made before an attack by missiles (disarmed) and after the hit are presented. As a result of the hit, the boat caught fire and sank. The test launches of an upgraded Buk-M1 air defense system missiles at simulated ballistic missiles and aircraft missiles proved the design characteristics.
Consequently, the latest upgrades built into the Buk-M1 ADM have made it possible to expand the capability of coastal area defense against surface combatants and broaden the range of threats that can be countered by the system