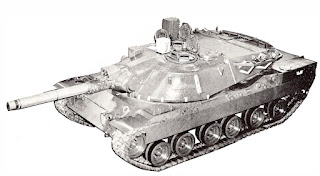 MBT-70/XM803; however, the following constitutes an interim response:

a. Automatic Loader. The 700-round life for the automatic loader applies only to the R&D models. The APE (second generation) loaders, will incorporate all the knowledge gained from the R&D version and should have a life approaching 1500 rounds. At that point (1500 rounds) the loader would be removed from the tank, inspected, and selected parts, such as the rammer head and rammer chain, replaced as necessary. Since the required life of the gun tube is 500 effective-full-charge rounds (equivalent to firing 500 kinetic-energy rounds) or 1000 missiles, it can be expected that the loader inspection and repair will coincide with gun tube replacement. It should also be noted that, in peacetime, most tanks will complete a 6000-mile overhaul cycle without firing 1500 rounds.

b. Overhaul Criterion. The 6000-mile overhaul criterion for the MBT-70 was established several years ago. At that time, the overhaul criteria for the M60 and M48 series tanks was 5000 miles. A 6000-mile criteria for a more complex vehicle such as the MBT-70 was, therefore, considered a significant improvement. The M60 and M48 overhaul criteria has recently been extended to 6000. This extension is made possible by the use of a thorough mid-life service. It may be possible to extend the cycle of the MBT-70/XM803 by a similar mid-life service. However, this cannot be deter­mined at this point in the development cycle. To change the requirement for the MBT-70/XM803 at this time, would necessitate that the component reliability goals be raised, thereby increasing the cost of the tank.

c. Ammunition. The problems associated with combustible case ammunition have not been completely solved, but have been reduced to an acceptable level. In fact, the combustible case in some aspects is superior to the metal case. The ballistic compatibility between the XN411 TPT round and the XN409 HEAT round is not exact, but is so close that the TPT round can be fired from the SHERIDAN using the XM409 sight reticle. The MBT-70 firings at Aberdeen have been done with the XM411 round using the computer set for the XM409 round. In spite of any slight incompatibility, hit probability specifica­tions have been exceeded. Concerning the XM578 APFSDS round, firings of the new modification A’S rounds are underway at Aberdeen. The testing and development schedule for the XM578 are compatible with MBT-70/XM803 develop­ment schedule.

d. Ballistic Protection. The MBT-70 QMR requires frontal ballistic protection against the US/UK 105mm APDS at 800 meters and all-round pro­tection against 14.5mm at zero range. The revised Joint Military Characteristics used in defining the “austere” MBT specified 800-meter frontal protection against Soviet 115mm APFSDS. This change was made because the penetration capability of the two rounds was thought to be comparable. Further investigation, however, indicates that definitive data (upon which everyone agrees) is not available for the Soviet 115mm round. Thus, a test criteria based on 115mm APFSDS cannot be established. USAMC has recommended that the revised MBT-70/XM803 QMR, due for submission to DA on 1 Jun 70, reflect US/UK 105mm APDS rather than the Soviet round. Protection against the current US/UK 105mm APDS round has been achieved at 800 meters through the use of spaced-armor. Invulnerability to Soviet HEAT round based on armor protection alone is not feasible. External arrays such as side skirts (which are being planned for MBT-70/XM803) and bar armor (which at this time is not being considered) would reduce the likelihood of jet penetration of the main armor.

e. Fuel Storage. Colonel Baltes appears to have confused two separate items concerning the removal of nuclear shielding and fuel storage. By agreement with the FRG, the internal boron nuclear shielding was removed from the МВТ in order to save approximately 4400 lbs in weight. There are no plans to store fuel in the spaced-armor of the turret where the shielding was removed. There was a plan to store fuel in the spaced-armor at the front of the hull in order to achieve the 400-mile cruising range specified in the original QMR. Since USACDC has agreed to reduce the cruising range to 325 miles, this additional fuel is not required and plans to store fuel within the spaced armor have been dropped.

f. Secondary Armament. Interim position regarding the secondary armament has not been reached. An essential consideration is that the silhouette of the tank be kept low. In addition to retaining present cal .50 mount on top of commander’s day/night sight, other alternatives being considered are: deletion of secondary armament, use of pintle mounted cal .50,"use of pintle mounted 7.62mm machinegun, and use of a cal .50 as an additional coaxial machinegun in conjunction with any of the preceding.

3. (U) You will be furnished the DA Staff recommendations by backchannel

as soon as they are completed. Gp-4.