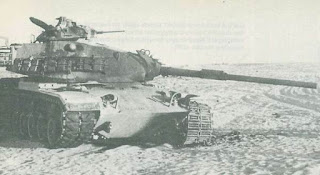 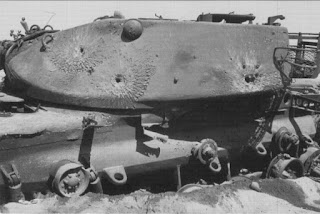 1. The majority of war-related observations concerning US produced tank shortcomings have been recognized and, as I understand it, study of each reported deficiency is underway. Therefore, this paper will only re-state deficiencies observed and will not go into detail on each.

a. Removal of the cupola and introduction of a multi­position hatch which will allow for battlefield observation without body exposure and with overhead protection is the most mentioned and perhaps most important single modification recom­mended. High tank commander casualties are partly attributed to the fact that the cupola requires the commander to expose himself to an unacceptable degree in order to view the battle­field and fight the battle. Additionally, although the IDF considers the M85 machine gun to be an excellent weapon, the difficulty of reloading is believed to nullify the excellence of the system.

b. An additional consideration, and one not generally noted in previous reports, is that the cupola a may "bounce off" when the tank takes a hit near, but not necessarily on, the cupola itself. When it comes off, the tank commander's head comes with it. This characteristic was reported and "clean" cupolas were observed on the battlefield.

3. Ammunition storage above the turret ring

a. Although not established by data, commanders indicated a high incidence of catastrophic M60A1 kills due to hits in the turret which caused either immediate or delayed burning and low order detonation of ammunition stored above the turret ring.

b. Assessment data indicates that of 119 IDF tanks, all types, examined, 57.18 of the impacts experienced were above the turret ring, thus indicating the vulnerability of ammunition stored in that area.

c. Study of various means of relocation of the ammunition stored above the turret ring is recommended.

However, a critical factor of the battle is the amount of main gun ammunition available. Therefore, reduction in the number of rounds available in order to reduce the vulnerability caused by ammunition above the turret ring is not recommended. (See 4 below).

IDF commanders strongly recommend the installation of a fire extinguishing capability in the turret. Many report that tanks could have been saved from going catastrophic if a built-in extinguisher had been available. They particularly desire the capability in order that burning ammunition might be extinguished.

The M73 and M219 co-axial machine gun performance was generally rated unsatisfactory by the IDF. Weak extractors, weak springs, cracks in various mechanisms and other deficiencies have been reported through AMC channels. It is possible that non-US produced ammunition may account for some of the difficulties experienced. The systems should be completely re-tested and evaluated for reliability.

IDF Armor commanders consider that the most effective system for the tank commander is the 7.62 dual purpose machine gun. This system provides the required anti-personnel capability, allows for more ammunition to be stowed and provides the means for establishing a "curtain of fire" for the unit when under air attack. Commanders consider this latter capability to be essential.

7. Searchlight and Other Externally Mounted Equipment

WSEG Team Report No. 96, USDAO Tel Aviv Msg 1125 May 74, DTG 211220Z May 74, provides a complete report on searchlight and other externally mounted equipment survivability. In their current configuration, such systems do not survive. Study and development of an armor protected system is indicated.

8. Anti-tank missile countermeasures are of continuing interest and the IDF has experimented, none too successfully, with sortie concepts. The development of a capability to create smoke, quickly, in the immediate vicinity of the tank should be investigated.